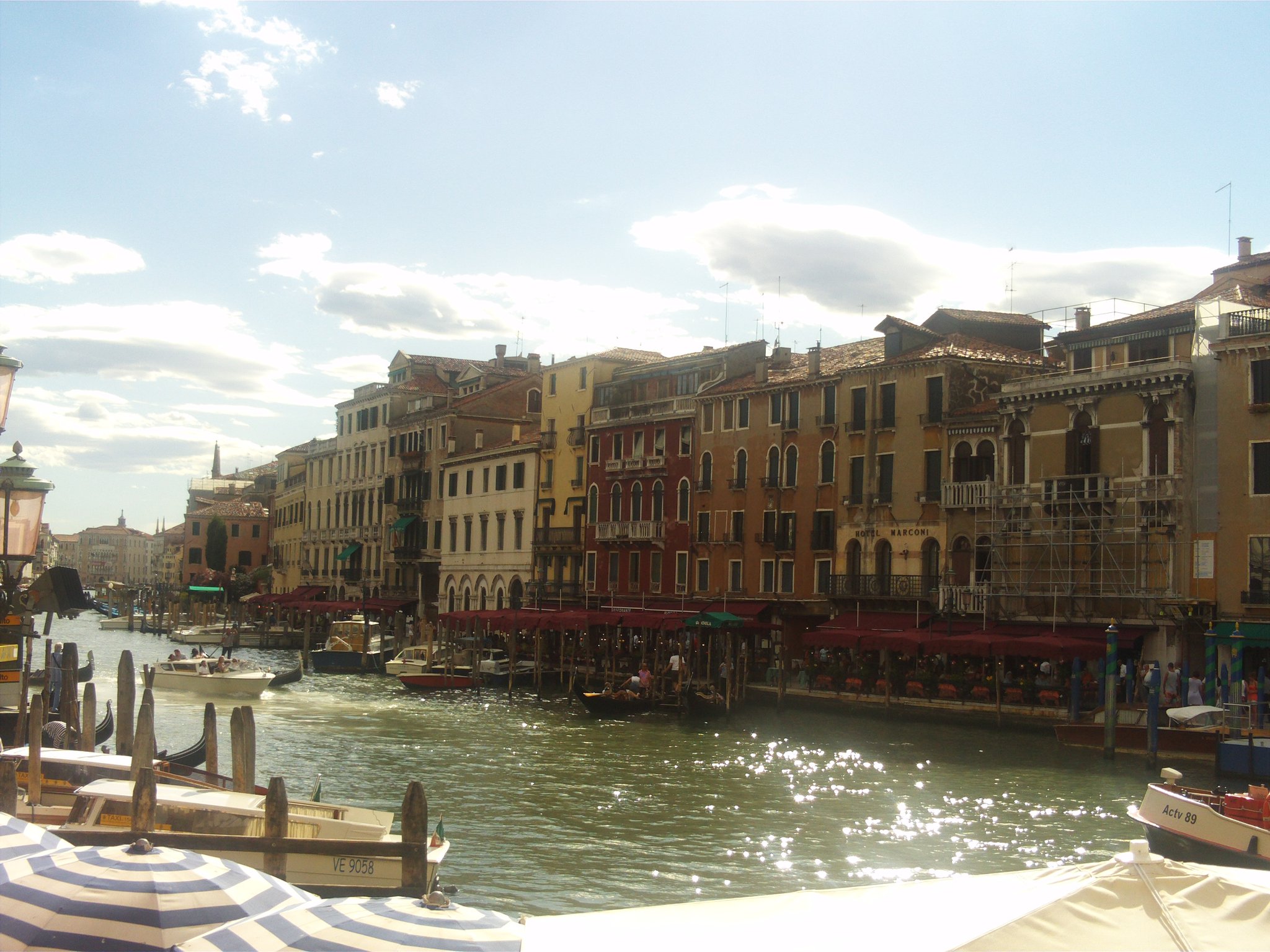 Venice is one of the most important tourist destinations in the world. In 2006, it ranked as the 28th most internationally visited city in the world; and in 2007, it had an average of 50,000 visitors a day. Due to its beautiful landscape (or perhaps more accurately, waterscape), uniqueness, and rich musical and artistic cultural heritage, this Italian city became a major centre for the grand tour in the 18th century. It remained a fashionable haunt for the rich and famous throughout the 19th century to the early 20th century. The famous Carnival of Venice was revived during the 1980s. Many international conferences and festivals are now held in the city.

The Rialto Bridge and the Piazza San Marco have the largest convergence of shops in Venice. There is a line of shops on both sides of every street in these areas. Although the narrow walkways between buildings can make walking tricky, especially in the tourist season, this hardly deters the throng that ply the route daily. For sale on both sides of the Rialto Bridge are the famous ‘Venetian’ masks in different designs, colours and sizes. There are also carvings of the gondola with the beautifully painted glasses from Murano, an island in the Venetian Lagoon. The Murano glass comes made in different shapes and sizes and also as pieces of jewellery. I discovered that shopping in the busiest tourist areas is more expensive than walking into the neighbourhood shops to buy some things – ‘Tourist Price’, it is called. So, I would definitely recommend going off the beaten track sometimes, for the more economically priced items. A breathtaking view of the Grand Canal awaits you from the Rialto Bridge. We could not resist going down to sit in front of the water and watch Venetians and tourists walking past.

We were really looking forward to riding a gondola, but on asking the price, my friend Avie and I screamed. It was a 100 euro for a trip! That was the price of my plane ticket to and from Venice. We had to pass. We caught our fun by watching the gondola glide by; they have different colours, each with unique interior fittings. Some had red velvet draping with carved wooden lacquer seats. The most interesting – and romantic – gondola ride we saw were a couple with a bottle of champagne and flute glasses, complete with a singer. The guy dished it out in a full tenor concerto voice. Everyone that gathered on the bridge gave him a round of applause when he was done. It was really beautiful. From this spot on the canal, we also caught the wonderful sight of a newly married couple still dressed in their wedding outfits taking a gondola ride. It looked like the wedding of dreams.

Venice was a major centre of art during the Middle ages, Renaissance, and Baroque, and thus went ahead to develop a unique style known as the Venetian School. Canvasses originated in Venice during the early renaissance and they were generally rough, unlike the polished present day ones. Venice has long been a source of inspiration for painters, authors, poets, and playwrights. Two of the city’s most famous writers are Marco Polo in the Middle ages, and Giacomo Casanova. Of course, as any lover of literature knows, Shakespeare set his famous plays, ‘Othello’ and ‘The Merchant of Venice’ in this city.

This phenomenon is worth mentioning because of its peculiarity. There are many taps scattered all around Venice. There is a tap almost at every two street corners and the striking thing with each, is the shape. It does not have any device to turn it off. Shaped like the open end of a faucet, it is always running. The water that gushes out from it is so cold, it soothes your thirst immediately. As a walking tourist, there is no need to buy water, just carry your bottle and be on the lookout for a Venetian tap.

After spending the previous day walking round in circles, asking for directions to the Basilica, we had resolved to make it the place to spend the last few hours before catching our flight out. Time permitting, we hoped to visit a museum or two. Unfortunately, we never found the Basilica. Instead, we saw one of the breathtaking churches of Venice and sat down on the stairs with the other tourists watching the flocks of pigeons coming and going. We later found ourselves in an outdoor musical concert of sorts, with a lady playing the cello accompanied by four men on the piano, guitar, and drums. It was a wonderful, cool evening. After enjoying the music, we set off on our way back to the hostel. Due to the many dark alleyways of Venice, it is not safe to wander the streets in the dark. Everyone is back in their houses by 8pm; and the streets are silent, except for the busy tourists areas where most of the hotels are.

The following morning, we found the Basilica di San Marco after another round of asking for directions, and I have to say it was worth the trouble. The pathway to the square is between an array of shops on the ground floor of the Procuratie Nuove building. Bursting out to the San Marco Square, it was a wonderful sight to behold. Opposite is the La Fenice Theatre; and a little bit further down to the right is the Doge’s Palace, also known as Palazzo Ducale.
Walking down towards the Basilica entrance on the left is the Clock Tower (Torre dell’Orologio) with the view of the astronomical clock in the front. Adjacent is the Basilica di San Marco. The entrance has the painting of the ascension of Christ and there are different paintings telling different stories on the individual archess of the building. Right in front of the Basilica is the Bell Tower of St. Mark’s (Campanile di San Marco), a tall brownish building right in the middle of the square.
On the opposite side of the square is the Correr Museum. It holds interesting collection of globes, starting from the 16th century. It also has an Archaeological Museum of Roman Antiques and a picture gallery in the building. Not far from the Bell Tower is the column bearing a winged creature, representing the Lion of Saint Mark, facing the open canal. From here, you have a view of the canal in its open majesty.
Standing in front of the canal and looking round the whole square, it was lovely, with hundreds of pigeons moving around the feet of the tourists. Funny enough, these particular pigeons seem very at home around people. I have known birds to fly on human approach, but the reverse is the case with the pigeons of San Marco Square.
What a wonderful trip. As I got on my flight, I promised myself to come back and spend a week, going round the Islands.

This article was first published in 234Next.com