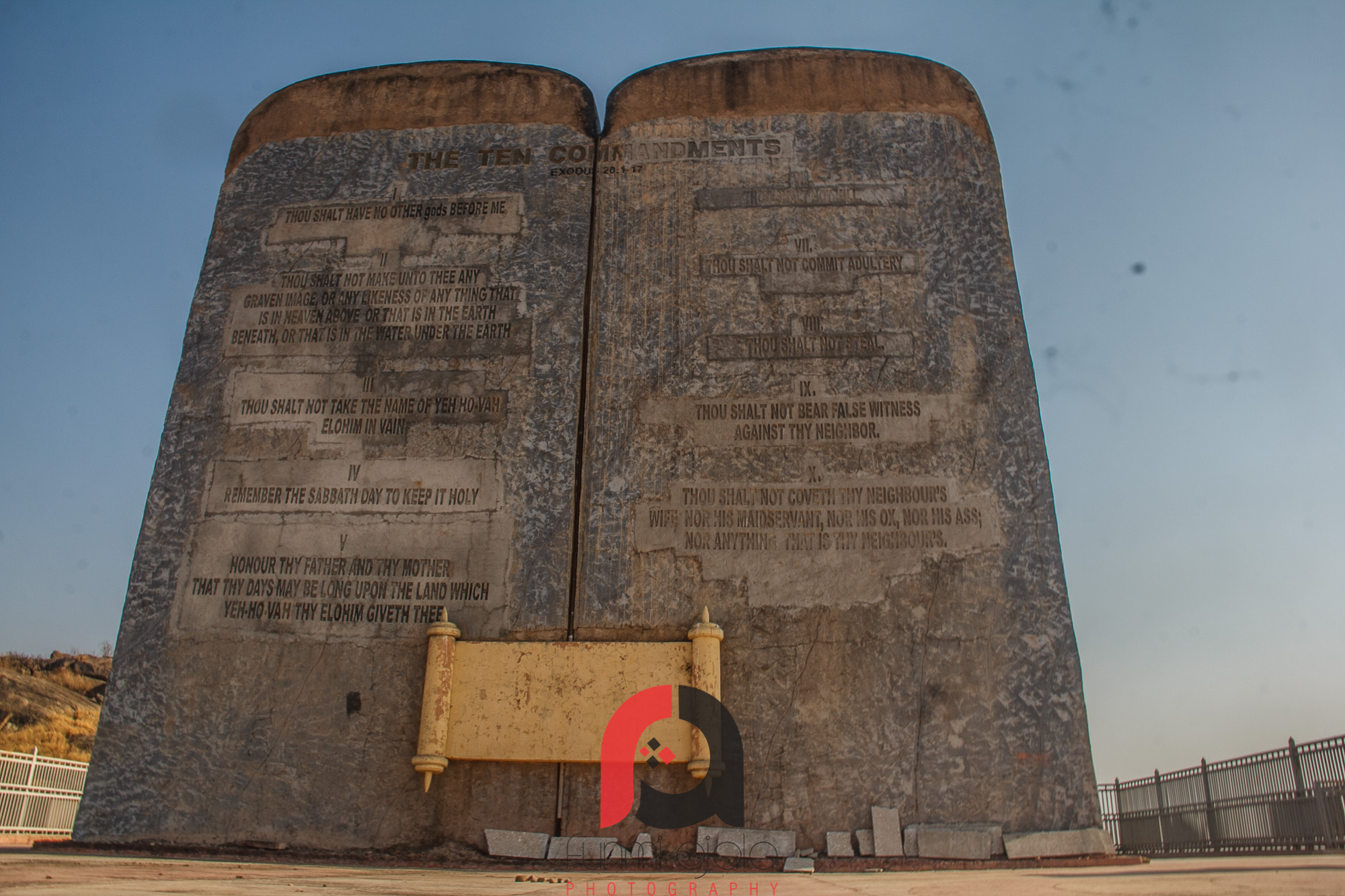 Growing up we all read and were taught at home and the Sunday school about Moses and the Ten Commandments which was carved on tablets. All the pictorial depiction I grew up seeing were of stone tablets, never gave it much thought as it was mandatory for you to know the Ten Commandments by heart. Until a recent event. I was on my Instagram page and this picture of a larger than life tablet of the Ten Commandments was on my time line courtesy of a photographer friend who took the picture. I quickly engaged him and he told me which city the structure was in but he was not forthcoming about the specific location.

Luckily for me, I had made up my mind to visit Plateau State and more importantly visit Jos town to see what is going on there. I have three friends that relocated from Lagos to Jos with their families and businesses. I was told Jos is where the business is picking up now.

If you are conversant with the history of Plateau State you will know that Jos has suffered both religious and ethnic crisis for a certain number of years thus crippling the economy of the state.
I left for Jos on a Sunday morning from Abuja and got in around 2pm. I stayed with a friend who picked me up and after resting for a while, I set out with her to look for the Ten Commandment tablet. I had seen the location tag on the picture as City of David, even my friend had not heard or seen the tablet before and she has been living there for more than two years. We asked people and no one seemed to know where City of David is, they all thought we were looking for a church. We returned home that day when it was getting dark with the mind of locating the place early the following morning.

I then remembered another friend that recently came to Jos and I started working through my phone. He was able to describe it but we were not able to get it immediately, after asking around we were directed to a place, which turned out to be a church compound and there was where we got our breakthrough FINALLY!!!!. They were able to direct us towards the place. Apparently I gave it the wrong name, the place is called New Jerusalem not City of David.

We almost missed it because I was having this picture in my head of a wide expanse of land with the structure in the middle. It was the height that suddenly caught my attention, for a stone tablet it was larger than life. This tablet stood at almost 25ft tall in the middle of a fenced compound. It is the tallest structure in that vicinity. The gate has two security guards and we pleaded so much, one was ready to allow us in while the other said no asking what if the owner comes around which was very impossible for it was around 7:30am in the morning and it was a public holiday. Nigerians love their sleep and holidays. Eventually, we were allowed in.
On looking round I noticed that the suppose plan was like a crusade or prayer camp for Christians. It has three semi amphitheater lines for seats to be fixed on it with the plastic seats still in their packs and under the stairs where the tablet was erected. It look so amazing but it was obvious that this is an abandoned project and someone is trying to hide it. You can see bushes growing around the place and the inscriptions on the stone was already wearing off.

Whatever it is they should please resuscitate the project and finish it. It is a potential tourist attraction site and a major money spinner. On seeing the picture you will never believe that it is somewhere in Nigeria, so why not complete it and open it to tourists with a good private management company to take care of it.

Jos is a very beautiful town with lovely weather and nice scenery. One thing people need to realise about traveling is that it fosters peace and unity. When you learn more about other people’s culture, religion, their way of life and who they are, you will first analyze issues from what must have happened to make them react the way they did and not be biased based on religion and ethnicity.
Nigeria is a very beautiful place, let’s travel more within our country, promote our culture and tell our positive stories. There is no place like home.