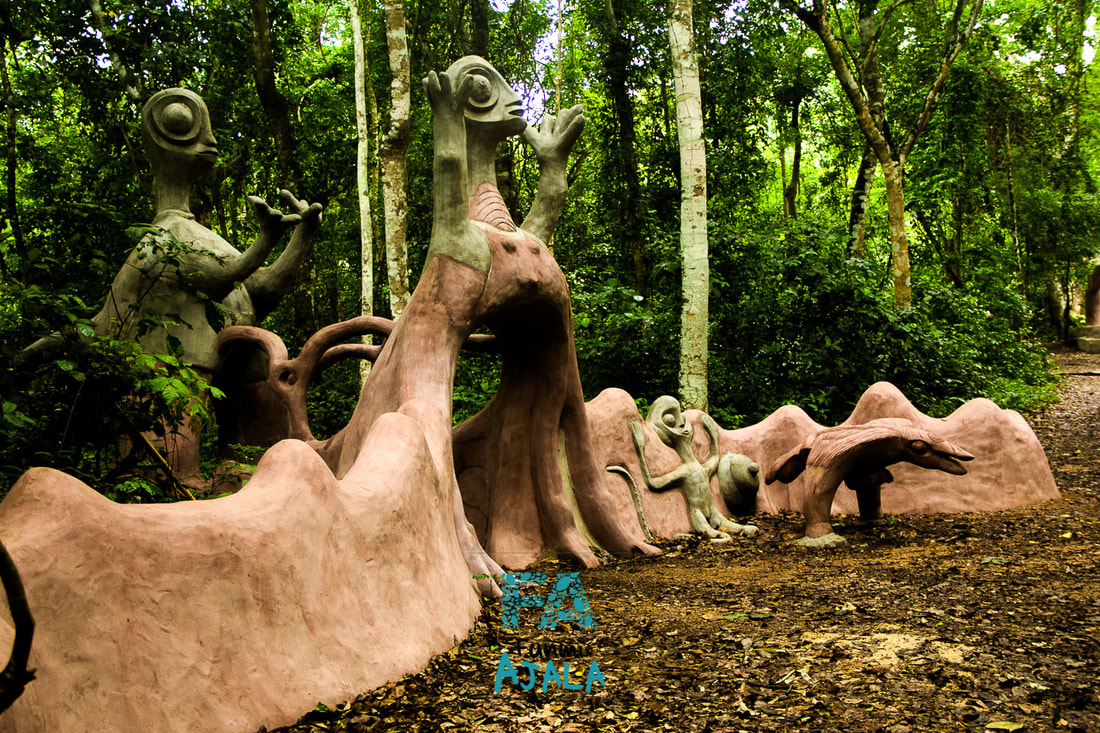 Osogbo the capital city of Osun State, whisch was created in 1991 from the eastern third of Oyo state. It is bounded by the states of Kwara on the northeast, Ekiti and Ondo on the east, Ogun on the south, and Oyo on the west and northwest. The Yoruba Hills run through the northern part of Osun state. The Oshun is the most important river thus the Osun Osogbo festival which is celebrated every August.

HISTORY OF THE NAME OSOGBO

Oguntimehin, a hunter from Oyo, who was also a friend and acquaintance of Larooye on one of his hunting expeditions on instruction of his friend, discovered a stream and the place called Lakookan. He went back home to inform the king about the situation of things. The king called the entire town to relate the information to them about the discovery of the water source after a long period of drought. The decision was made to relocate to Lakookan.

On moving, it was decided that they will stay put at Lakooka, but as it is customary in Yoruba land you do not make a huge move without consulting the oracle. After consultation, the oracle told them to move on and they will perceive a sign when they get to where they are to put root.

On getting to where the present Osun shrine is, they perceived the sign and they stayed there for some time. As there main source of livelihood is farming, preparation was made to start farming the following year after settling down. They started clearing the bush and in the process one of the tree fell into the river, and the voice of the goddess called out to them saying ‘Oso igbo e pele o, gbogbo ikoko aro mi ni e ti fo tan’, meaning ‘Hello deity of the forest,you have broken all my dyeing pots.’  Thus the name ‘Osogbo’ from the word ‘Oso Igbo’.

They begged the goddess who then insisted that they should leave the compound (where the shrine is) totally and move to where they won’t hear her voice again.  But before they left, she made some promise with them that wherever they are she will be with them that the war will not disturb them, they will not face any issue, all sorts of promises were made.
And with that they in return made an oath with the goddess that if she can do all what she said and continue with it, they will be coming to the river banks every year with a virgin lady that will come from the royal family. The lady will be the one to carry the calabash for the year, and that became the basis for the arugba and the festival.

THE GATE OF HISTORY

There is an iron gate with many carvings at the entrance of the Osun Sacred Groove. This gate tells the different history of the people and the Groove. Starting with the right side of the gate. Historically Yorubaland have different deities with different drums, a particular drum is important to Osun which is played whenever the festival holds. That is the depiction of the drummer at the extreme right of the gate.

And to let us realise that this is Osun and the indegenous work of the Osogbo people is tie and dye, that depicts the figure of a woman with her tie and dye pot.

Then the cowrie,  which is the currency for trading during the era, it was no longer trade by barter.
Next is the representation of the first Oba, Oba Laroye Gbadewolu, followed by the hunter, Oguntimehin, and then the gong which was used as a means of communicaton to the people. Then the 16 point lamp, also called ‘átupa Oloju merindinlogun’, which was given to the Osogbo people by the goddess herself and it is made of brass. Every nine days to the festival, this lamp is lit up with palm oil and cotton wool. It is believed that the smoke coming out from the fire will send away all the evil spirit.

On the left side of the gate, there are representations of the Arugba, then women with babies depicting the belief of fertility and how powerful the water. The water is believed to be a problem solver. Problems are believed to be solved once one bath in the water. Then the image of a woman with fish tail which represents the priestess, the woman in-charge of the Osun Shrine.

The groove has a main entrance for everyone, a specific entrance for the arugba and a side entrance beside the administrative building. On walking down to the groove you will notice different sculptures on the right hand side of a fence like structure. Walking a bit further you will pass a group of little structures, which were carved to depict the life of Susanne Wenger, also known as Adunni Olorisha, with her spouse, and her dog. Chief Susanne Wenger was an Austrian artist who resided in Nigeria and was the guardian of the Sacred Groove of Osun. She made most of the sculptures that are found in the groove.

Walking further you will come across an arch with steps, this leads to the inner part of the groove and there is the first palace in Osogbo.The palace has a low roof, built with clay and many column like pillars. The Arugba in from the gate via a side entrance and she moves on in a corridor like place till she comes out opposite the old palace where the shrine of the Priest is. The Arugba goes into the shrine with the priestess and the necessary people. This is where the final prayers and the needful is done for her to take the calabash down to the river.

Within this compound opposite the palace you will find the sculpture of a woman with many children around her, from her back down to her feet. This is referred to as Órisa Olomowewe, it is worshiped by people looking for children, they bring biscuits, sweets, all the goodies for children as sacrificial offerings to it.

Going further down from the old palace leads to the bank of the river where the Osun Osogbo festival Climax every year. There is a tree with a structure with its arm outstretched and some fishes at its feet. This structure represents goddess welcoming the people with her outstretched hands, and the fish at her feet represents the shoal of fish that comes out to eat the sacrifice.

The Arugba put down the calabash by the river and a shoal of fish comes out to pick the sacrifice. History has it that it was the messenger of the goddess that use to come out of the river to receive the sacrifice. She will pour some water in return which the people will rush to collect for use. The water is said not to be powerful for fertility alone but for whatever the need of the person is.

Going outside the sacred groove, further down the road on the right is another site which house the many massive artful representations of over 75 cultural gods, built by Adunni Olorisha. These are the depiction of her genius by  remodeling the gods in sculpture and ceramics. You will find Sonponna, which is the god of small pox, and many more larger than life figures. In recognition of its global significance and its cultural value , the Sacred Grove was inscribed as a UNESCO World Heritage Site in 2005.

One intriguing this that I discovered is the groove is filled with Monkeys and they are treated as sacred. Funny enough is their ability to tell time which i find quite interesting. When our guide was taking us through the forest path we heard the shrilling sound made by the monkeys and he said they are telling the time, on checking the time, it was about 2pm on the dot. That i say is weird. So watch out for the monkeys when you go.
Your trip to Osogbo is not complete without a visit to the sacred groove.

TO KNOW ABOUT THE OSUN OSOGBO FESTIVAL

1) It is an international cultural event. It has become a global event with people attending from Cuba, Brazil, Trinidad and Tobago, Jamaica, Spain, Canada, and the United States.

2) The festival last for about two weeks with different events at different point. Tha Arugba carrying the calabash is the climax of the two weeks festival which takes place every August.

3) The Arugba (Calabash carrier) is the key feature of the Osun Osogbo festival. She is a virgin (a cultural version of the Virgin Mary) who bears the Osun calabash to appease the gods on her head. She is from the royal family and is regarded a goddess herself. The people say their prayers and cast all their problems on her as she bears the calabash and makes her way to the river for the final sacrifice.

4) It is not just about the sacrifice, it is a huge business avenue for different brands to showcase their products and make sales.