The hidden ‘footprints’ of Olumo Rock 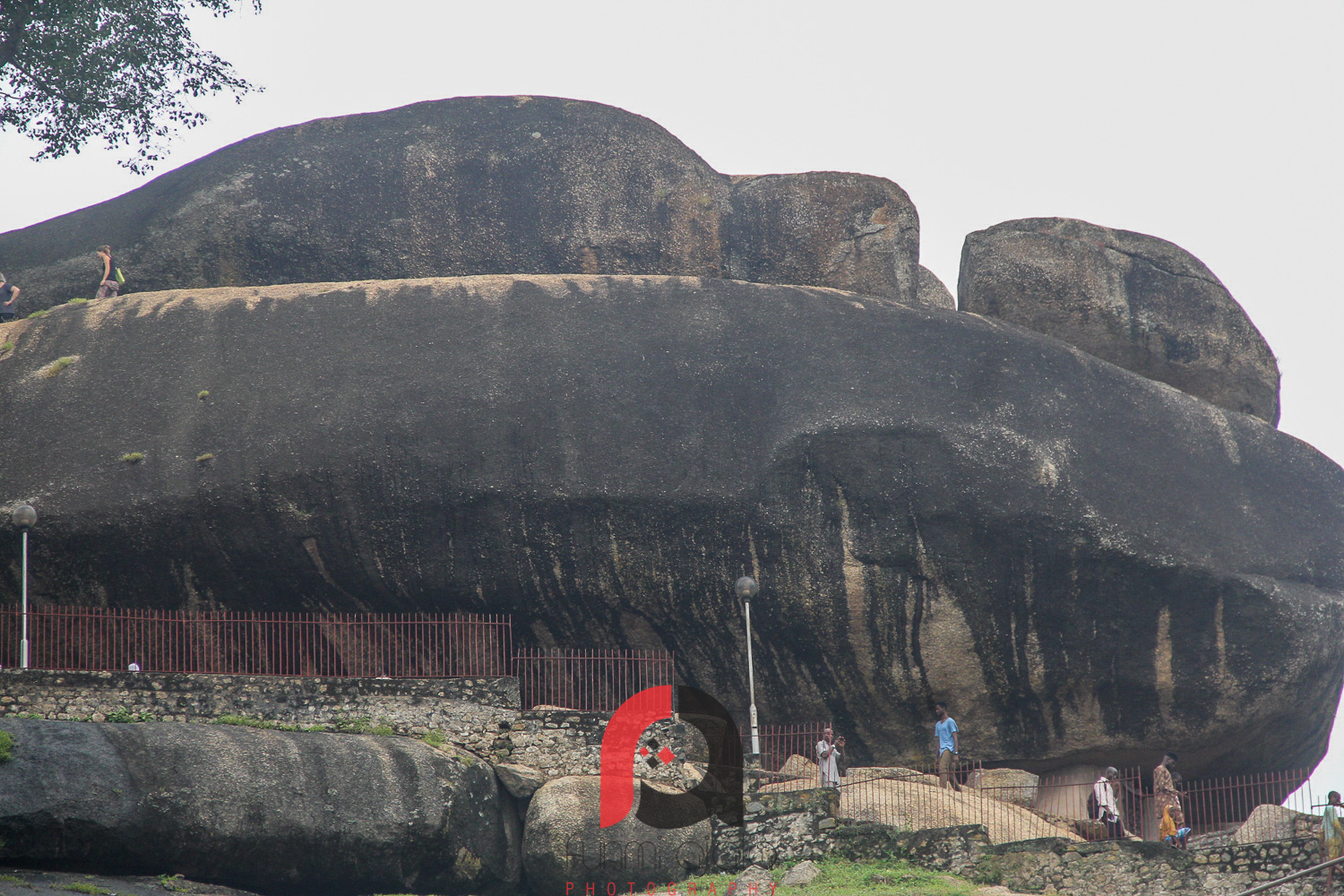 The hidden ‘footprints’ of Olumo Rock

We were headed to the Olumo Rock Tourist Complex, perhaps the most celebrated attraction in Abeokuta, Ogun State; but the journey from Lagos that should last roughly one hour ended up taking three hours. So when the bus finally pulled up in front of the gates, we started the tour immediately. The Olumo Rock towers in the distance and, from the complex’s main entrance, appears to be like a pregnant woman lying down on her back.

The tourists encircled a fountain built with jagged rocks glued one to the other; at the top of it sits a big pot (known as Amu in Yoruba), patterned around with Owo Eyo (white cowries). An inscription at the base reads: ‘Pot of Life’. Watching water gush from the pot and run down the rocks was a thrill in itself.
At the base of the fountain, there is another sign: ‘Make a solemn wish with your coins’. I would have loved to, but I didn’t carry a coin with me and I don’t remember the last time I set my eyes on one. Certainly, Nigeria still produces coins but they are scarce in our notes-dominated buying and selling world. Except the management of the complex produces tokens for this potentially exciting ritual—similar to what you get at the entrance of the University of Ibadan Zoo—many visitors will miss out on this aspect of the tour.

We were soon introduced to our guide. Our first stop was the art gallery, filled with paintings, sculptures and other works by Nigerian artists. The guide told us the story of a particular carving at the entrance to the complex, which looks like an open palm but is actually a seat with a stool in its front. The carved palm is made of the root of an Iroko tree and the table has carvings of different animals including the Elephant, which has a place in traditional Yoruba folklore.
According to the guide, the Elephant once wanted to rule the animal kingdom; but he was tricked and killed by some of other animals. This installation, according to the guide, could also be likened to how humans behave when they wield power. To demonstrate this, he asked one of us to sit on the chair; one of us dashed towards the seat in a blink of an eye. When he then asked the person to leave, he felt reluctant. In essence, the people elect leaders to positions of authority and when it is time for them to vacate the position it becomes a tussle, which is very common in most African nations.

There were some painted seats under shades of trees at the foot of the rock which serve as a sitting area for people who want to have a quiet time. About 40 into our climb, we came to  a place called the Lisabi Garden, which had a hut made from raffia and with some chairs and tables—it is a rest stop for people who want to have a bit of the local delicacies and servings of palm wine.

We then proceed to the cave—labeled ‘Egba Wartime hideout’—where the locals and their warriors were said to have hidden during the war against the Ijebu-Ife-Oyo coalition in the early 1800s. On our way, we passed by the main shrine of Olumo. The story goes that the cave was first discovered by a farmer who always took refuge there whenever he went hunting along the route. While the war raged, the Egba warriors had to find a place of refuge; the hunter led them to the cave under the rock, where they then hid for months. So Abeokuta literally means “under the rock”.

The cave has three bedrooms which are still visible from the present layout. Also noticeable on the ground, inside the living quarters, are six peculiar holes, said to be grinding stones used by the warriors. And there is a cooking area.
Moving upward from the cave a little bit is the residence of the Iya Olumo, who with her family are the custodians of the rock (Visitors to the top of the rock must pass by her house and you are implored to give her a gift and she prays for you, though this is not mandatory). At 131 years, she looks fit and many years younger. By her doorstep grows Ewe Akoko, used widely in Yorubaland as part of the coronations of a new King.  Significantly, the leaf used in 2005 for the reigning Alake of Egbaland was plucked from this particular tree.
The journey to the top of the rock continues from there. The outcrops become rougher and the pathway splits into two. From here one can see the elevators, installed in the early 2000s to ferry visitors to the top of the rock. Nowadays, sometimes it works, sometimes it doesn’t. The alternative, the path more frequently taken, is the flight of steps (137 in all).

Climbers who reach the top of Olumo come face to face with a century old tree, which grows out of the rock. They are also rewarded with a scenic view of Abeokuta town, spread out as far as the eyes can see. The brown roofing is noticeable. From there, we could see the St Peter’s Anglican Cathedral, the first church built in Nigeria (1844), and a few other historical buildings.