The Ancient Town Of Idanre Hills 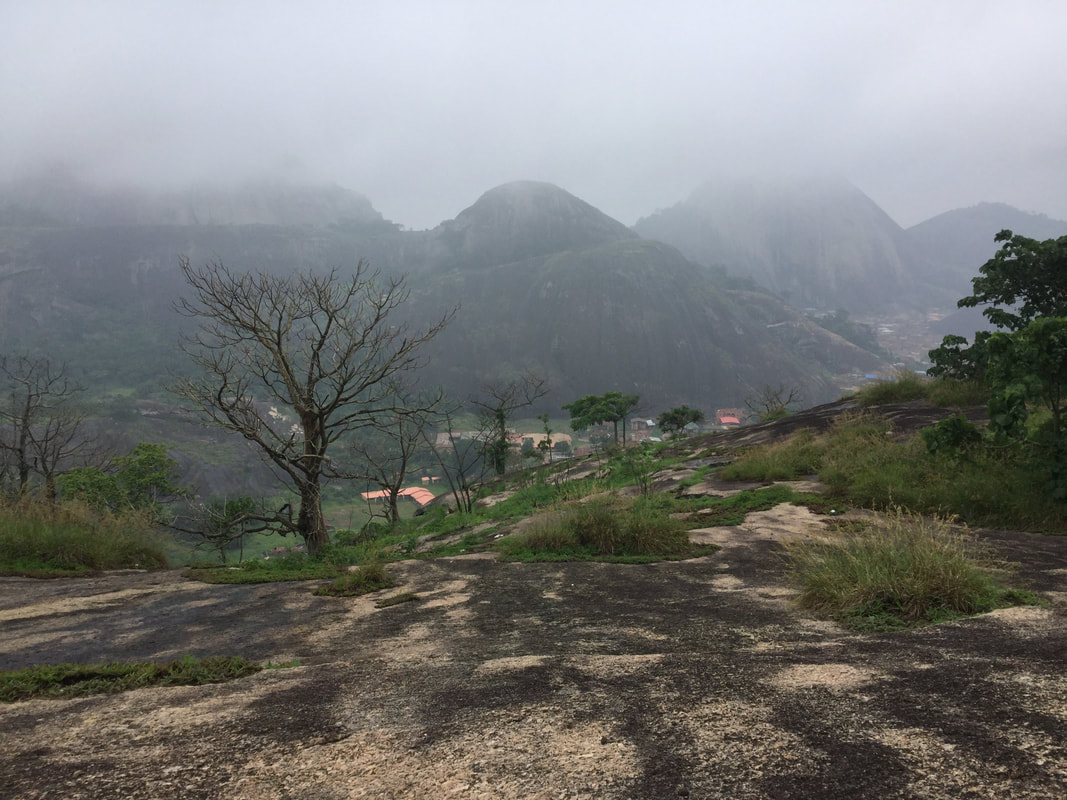 The Ancient Town Of Idanre Hills

The old Idanre Hills in Idanre Town, Ondo State, Nigeria is said to be about 800 years old and about 45 minutes drive from Akure, the State capital. On entering Idanre town, you behold the different hills to the left and right. It is a magnificent view with misty clouds covering the top of the hills. The hills look so larger than life and you are amazed at the natural beauty you are surrounded by.
Going on a group tour with about 30 other people was fun. We drove straight down to the end of the road and there is the Idanre Hills Tourism office. It is a fenced ground where you will find the entrance to the steps that leads to the top of the hill, the ticketing office, and information desk about the hills. On your left is a restaurant/bar where you can get cold drinks and water and i think they sell food on weekdays there. There are chairs spread out under a tree if you want to have a sit out at the foot of the hill.

We gathered round to listen to Awolo, our tour guide for the day.

CLIMBING UP THE HILL

On getting to the top you will notice three distinct mountains on the opposite side from where you are standing. We were told that the middle one is called Ojimoba and stories has it that during the war the rock swallowed the wicked people. So anytime from 5 pm once you get close to the rock you will hear the noise of the trapped people inside the rock.

There are various hills that make up the Idanre Hills in all. The hills are smooth and dome-shaped in nature, with its tips in the clouds. it is also known as “The city of inselbergs”.  It is said that the hills were named after some historical figures who were involved in the building and evolvement of the old Idanre town on top of the hill to the new Idanre town at the bottom of the hill.
One of the hills is named Olofin Hills after the first oba of Oke-Idanre town and another is named Orosun, which hold the highest elevation in South-West Nigeria.

There is the Agbagba hill which is famous for the Agboogun footprint, visitors are made to put their feet in them to see if they fit. In the ancient time, it is believed that anybody whose feet do not exactly fit is considered to be a witch or wizard. This reminds me of the footprints of the elders that is found on the Ado-Awaye mountain on the way to the suspended Lake.

Carter Hills is another hill which is named after a former colonial governor who signed a peace treaty with the Oba of Idanre in 1891.

The Orosun peak has a height of about 3018 metres above sea level, towering into the sky with floating clouds embracing it. Orosun peak is regarded as sacred and worshiped by the people of Idanre. This is called the Orosun festival which takes place annually in May. It is a week-long activity during which indigenes travel down to Idanre. During the festival, the Aworo people live in a house at the Old-Oke Idanre for the whole period where they performed spiritual cleansing of the ancient town and sacrificial offerings to Orosun, the god of the highest peak on the hill. History has it that Idanre Hills has protected its people against invaders.

SITES UP THE OLD IDANRE TOWN

There is the first primary school called Igbore Primary School, founded in 1896, and not far from it is the old Prison which is directly opposite the old court, that is from the courthouse straight to the prison, judgement is served very hot.

There are a few houses around the old prison and court of which most have collapsed since they are made of clay on the far left is the Ajin quarters, and on the right is the old Mausoleum which is the burying place of kings that dies back then. These are surrounded by high rocks.

A little bit further up we saw a pool of water which we were told is coming from a bigger source further down called the Arun River. In the middle of the pool was a stone which was used as a test of strength for young men then. If you are able to carry the stone that means you are strong enough to be a warrior and have achieved manhood. Our guide told us that the Arun river is a miracle water, if you are looking for a spouse, jobs, etc, wash your face with it, you can drink it and you can bath with it. You can hear everyone in the group looking around for containers, quite hilarious.A little bit further we met a man draped in white and we were told he is the priest guarding the shrine in the old town. He came out to pray for us all in the bid that we will drop some money for him. Our guide seem a little bit scared of him saying that he does not want to be cursed by him.
We passed by the rock of “The Unreadable Letters of the Flood”, which is indigenously known as “Adìye kòwé, Òyìmbó kàátì” inscription which means ‘a white man cannot decipher a chicken’s writing’. It is not very legible and thus very hard for people to figure out what is written there. On our way was a huge rock which seems like it wants to roll away. We took a group picture there and it was quite fun.

In order for us to continue our we had to climb up a steepy place, which took us further high up. It was a very tricky climb but the view was worth it. We then climbed down and we saw some old mud houses which are part of the old-Idanre town. There are still some houses in good condition that are standing in the old-Idanre town.

We then went on to the old Owa’s palace which has lots of relics, statues and different images in the courtyard. There was a section with skeletons of cow heads, there were many of them. It was explained to us that to know the number of years the king used on the throne a cow is killed yearly for sacrifice, the heads are kept in this section for the purpose of counting. This is no longer a practice. The old palace architecture has low doors meaning you have to bend down in order to enter and exit.

On climbing down you will notice how the new Idanre town is right in the middle of the hills, it looks like the hills serve as a fortress for the town. Idanre Hills was added to the UNESCO World Heritagr Tentative List on October 8, 2007 in the cultural category.
If you love hiking, it is a good climb with a lovely view of nature. Idanre Hills is the only mountain/hill with good steps right to the top but more can be done by clearing the grasses and shrubs by the sides. If kept in proper condition all year round, it will attract families with kids as well as generate more than enoungh IGR for the State.

If you are in Nigeria, do not miss a visit to climb Idanre Hills.