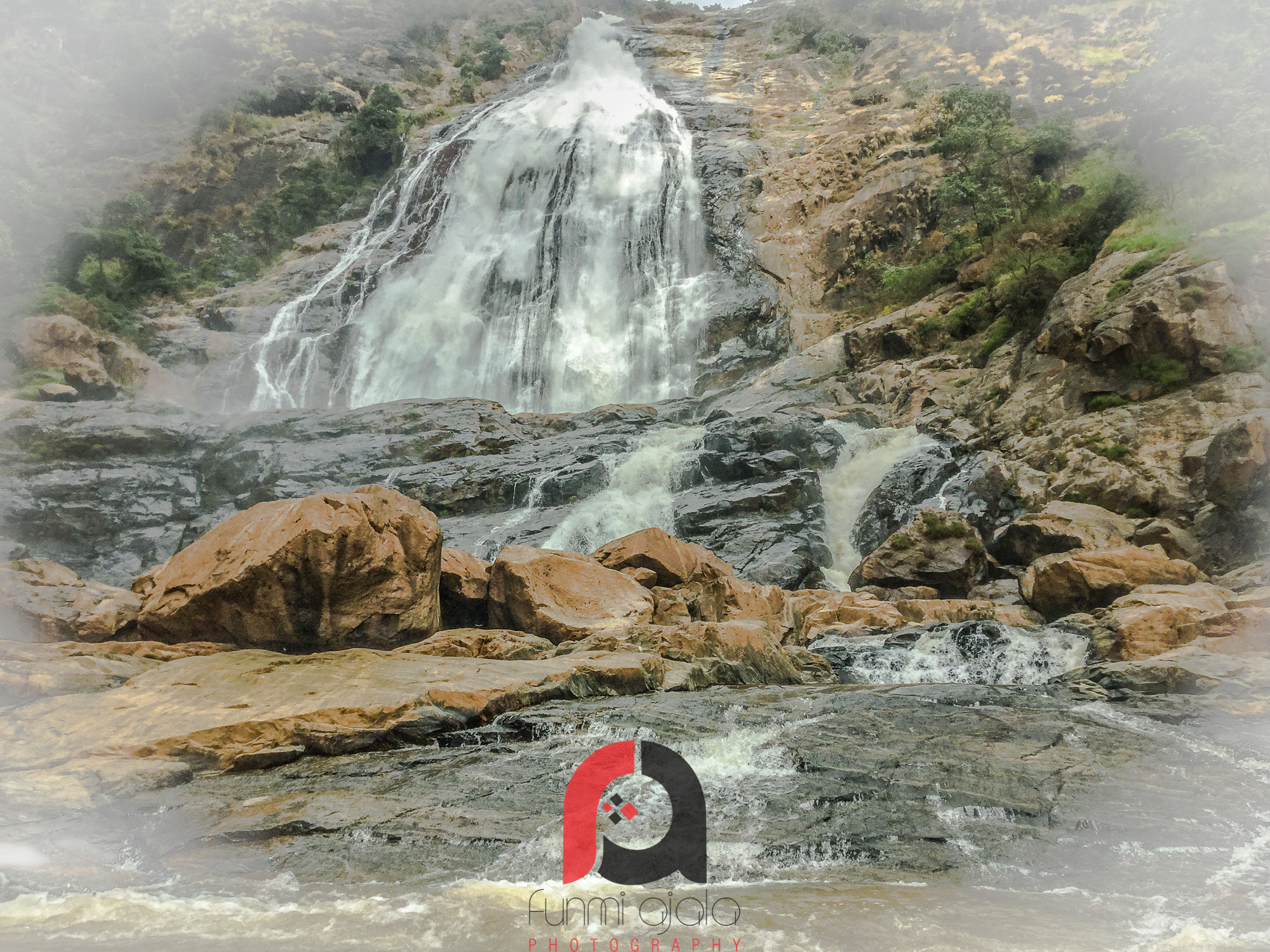 It all started with the goal of documenting all the waterfalls in Nigeria as part of my portfolio, and in all I have chased about 12 waterfalls.

I have heard different tales about Farin Ruwa, some of the small bridge to get there, some of the presence of crawlies and so on. But for me, nothing will ever beat having the experience.
With a system of always staying back in places i want to explore whenever my work takes me around (Yes, I do have a 9-5), i gladly hook on the opportunity when it avails itself again.

Work trip to Abuja for a week made the journey to Farin Ruwa possible. I and a couple of adrenaline junkies embarked on this journey on a Monday morning. We were waiting at Nyanya bus stop looking at the crawling traffic on the other side of the road when my friend Khalidz just said, “It’s Monday morning, people are going to work and we are going hiking”, I smiled happily to myself, goals on its way I thought.

Farin Ruwa is in Wamba Council area of Nasarawa State, the neighboring State to Abuja, FCT.
From Nyanya we board a car going to Akwanga straight, sometimes this is not possible for an individual but because we had the numbers, we got a vehicle on time. Nyanya to Akwanga was almost an hour. From Akwanga, we board another vehicle to Wamba where we disembarked at the Junction leading to Farin Ruwa. We then got bike men to take us to the fall.

Then our journey began. There are little villages on the way such as Mama, Marhai, Kulere and Wamba, the terrain to the waterfall gets dusty and challenging as you go further in. Your real journey starts when you cross the first stream which is the most active of all the streams that you will have to cross to get to the Fall. About 15km from the fall you will witness a wonderful view of the fall as it flows against the large flat chested rocky terrain. It gives you an illusion of been closer to the waterfall, but alas, your journey has just started. The view is picturesque.

The first bridge is built with concrete slabs and is quite strong. It can take bikes but not wide enough for cars. The the climb up and down the hill starts. I tried to compare this terrain to the one of Owu waterfall in terms of the challenges faced in getting to them. They both seem to be the farthest into the hinterland so far for me in terms of roughness. We passed six streams before getting to the waterfall. There are some rocks that were laid in the streams for people to walk on making a rocky pathway exception of the first one with a bridge. I did walked through the rivers for I was wearing plastic shoes. Advisable when hiking where water is, get a good crocs with good grip soles.

On your way, about 5km to the fall one would noticed some abandoned uncompleted buildings on the far left. We later learn from our tour guide, Mr Emmanuel Agalti, a staff of the Tourism Ministry that they were suppose to be chalets for guests to stay in. But like the sad story of all the Tourism spots we have, it’s an abandoned project.

We met our guide on the way as we were about to cross the first stream. He live in one of the villages we passed on the way, and once we were spotted as strangers, he head out to meet us.

At some point we will come down from the bike, walk a few distance and then climb back again, drive some few metres and down again. On getting to the last bridge which is an iron bridge, we parked the bikes and then walk into a spaced forest with trees left and right forming an umbrella above. From here you will start hearing the sound of the water, you have to keep walking and then you see some stairs that leads down to the fall. The first close sight of the fall is amazing.

In October, it is not at its fullest but one can see and feel the force of the water. Surrounding and leading to the waterfall are high range hills. We were told by our bike men and later confirmed by Mr Emmanuel that the other side of the hill is Plateau State.

Mr Emmanuel Agalti, who is 13 years in service, started working as a tour guide with the Ministry of Tourism in 2004 is also the keeper of the fall.

“Farin Ruwa was discovered during the reign of Abdullahi Adamu, a once civilian governor in 1999. The source of the fall is in Plateau State. On the other side of the hill is Plateau State. It is from Sha in Bokkos local government of Plateau State”, he explained.

Nasarawa was created on October 1st, 1996, it was splited from Plateau State. If you have been you Kurra or Assop falls in Plateau State, you will notice the same rock structures, formations, patterns and colours with Farin Ruwa.
There is no doubt that it is part of Plateau State.

On what the plan for the fall was when it was discovered, Mr Emmanuel explained further.

“It was initially opened as a tourist site with plans to develop the place. On the way there are abandoned chalets which were meant to accommodate visitors to Farin Ruwa. The project was started in 2005 and abandoned in 2007”.

On asking if any effort has been done by the present administration, he said not much effort has been put in to revamp the place. Though the steps that leads to the fall from the crossing of the last stream was built by the ministry.

Weekly visitors to the fall is around an average of five people or more than a bit. People know about the fall but the major challenge in coming down is the bad roads and the visitors are not so encouraged on hearing about the bad terrain.
There is no accommodation around the waterfall except in Wamba, which is the nearest motorable place to the waterfall.

There is no gate fee for the fall, but visitors are encouraged to give what they have to the guide to clear the bushes that leads to the fall. The bushes and shrubs are almost 5ft tall and thus we were struggling even on the bike to pass through.

At it’s fullest, Farin Ruwa is compared to Victoria Falls on the Zambesi River between Zambia and Zimbabwe in respect to it’s whiteness and the mist that emits from the water. You cannot get down the stairs to move close to the water at it’s fullest.
The streams one has to cross to get to the fall are always full with high current. Early to mid rainy season are not the best advisable period to visit the fall.

It will be good for the path to be cleared so more tourists can come around and the people of the communities can develop local crafts to sell.

Next time you think of visiting Victoria Falls, first visit Farin Ruwa before heading out to the Zambia.