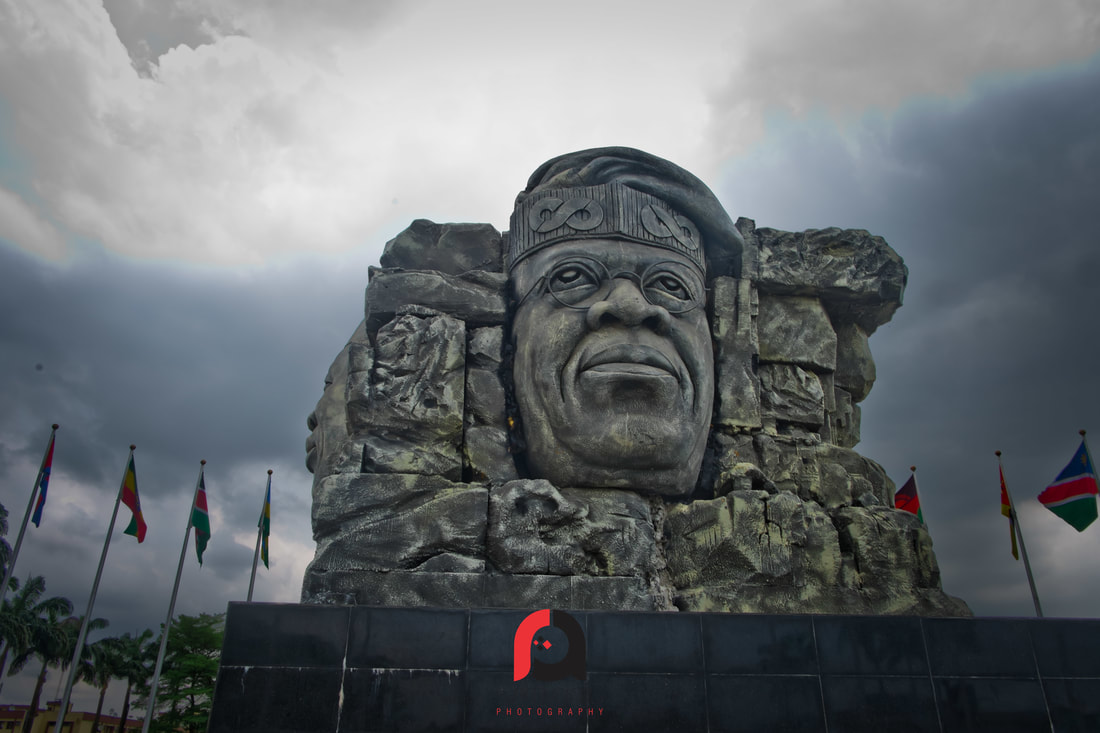 It’s Friday, the weekend is here and the kids are on a short break. The question that parents struggle with most of the time when kids are on break is majorly where do we take them for fun? The mall has always seem like the next place to take them, get them to see a movie, fill them up with pizza or any other unhealthy food in the mall’s food court and back home. This is not a very healthy and fun way of treating your kids to a day out.

If you live on the mainland, then the JJT park in Alausa, Ikeja is the place to take your kids for a nice weekend outing.

The main attraction of this park is the merged bust of the three former governors of the State. It is erected in the middle of the 54 flags representing the African continent. It is a larger than life size statue. Guessed it would have been made with stairs but because it is near the Lagos State Assembly and the Lagos State House, security is of paramount essence.

THE 54
Another thing I found educative in this park is that each of the 54 flags has the country’s name, Capital, currency, flag colour, and size engraved on the plaque holding the flags. It was funtime for my nephew and I as we played country and capital with flag colours. This is a very cool learning technique with fun incorporated.

On entering the park on your left hand you will find the play area for the kids, there are about five swings that they can have fun with. The design allow kids to climb walls that were deliberately built not too high for kids to climb on. Towards the other fence end, still on the left is the small food court. There is a sharwama and drink vendor with someone that sells gala with biscuits. There is not so much going on in regards to food.

We later saw a group coming in with their baskets of food and cake for a small birthday picnic at the park. There are different huts and sitting areas all scattered round the park. There is also a sign that says Free wifi, i do wish them luck with that one, though there were people working at different point on their laptops in the park.

Another magnificent structure is the Eyo statue which has a wooden bridge built into its centre. It is surrounded by a fountain which was not working when i went. The facility manager said kids were throwing bottle tops and covers in the fountain so they shut it down for maintenance.

The park also boast of a walk through fountain where kids play right in the middle with the water gushing out around them. It is a fun one for the kids.
When you walk round the park you will see the bust of each of the governors at different location around the park.
There is also the children’s toilet and other facilities around the park. There is a bird area with different species of parrot. It is small to be a sanctuary but it is a beautiful site to behold.

This park is managed by Lagos State Park Services (LASPARK). This is a good initiative of the State to boost tourism but more importantly for the kids to have fun and learn more.

So do take the kids for a fun outing at this part, and did I forget to mention that it is FREE.