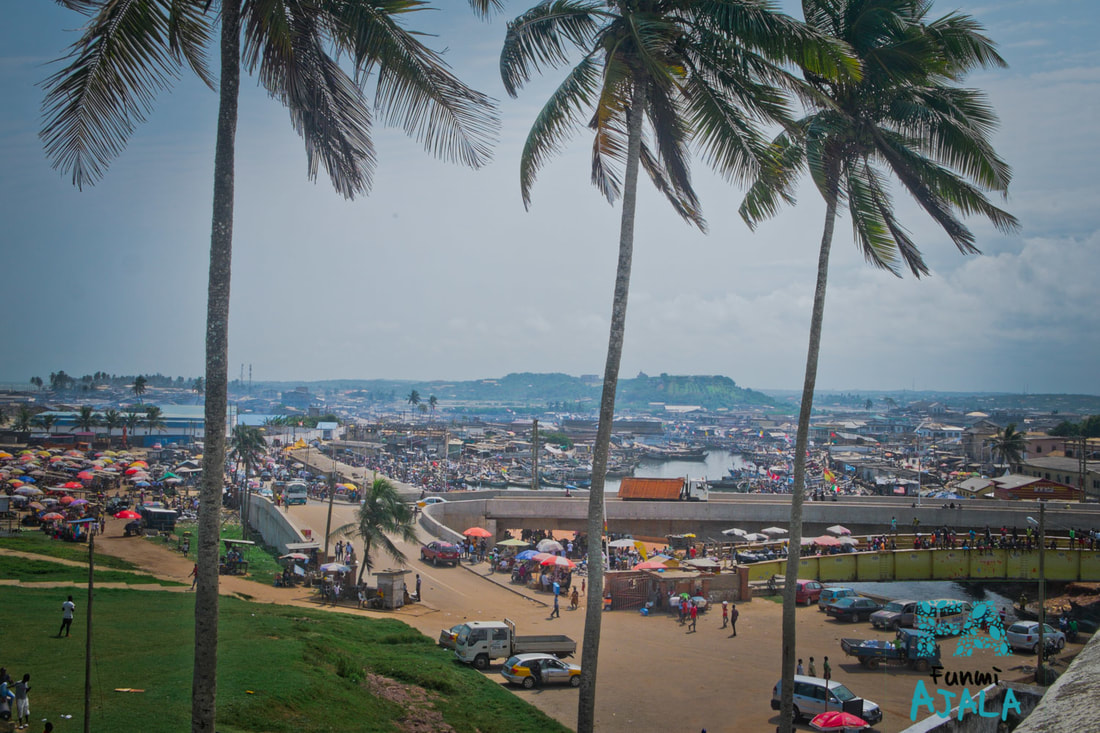 This history is never told to pass judgement. It is never told to pass accusing fingers at a friend, No. It is never told to open old wounds or to remember the sufferings that our forefathers went through. But it’s simply told to educate one another. The history is told because of education.
These were the words of my guide in Elmina Castle, Elmina Town in Ghana. The history of the trans-Atlantic Trade is not complete without visiting Ghana. Ghana has three castles and many forts that were dedicated to the Slave Trade. The castles are Elmina, Cape Coast and Osu in Accra.
This story is a bit touchy to write because it was not a pleasant one but it is a story that must be told to help us question how we live with ourselves everyday.

Driving into Elmina one can not but notice the coastal line on both sides of the road  and on entering the town, the history is evident with some of the old architectural buildings that lined some part of the streets and also the main occupation of the people of the town, Fishing.

Elmina castle is a hot tourism spot and is not far from the Elmina fish market which also serves as the major market. It has all the trappings of people trying to sell you something once you are spotted. One cannot dismiss the colourful array of fishing boats that are at the pier nor dismiss the smell of fish that fill your nostrils.

You have to cross a sort of gangway that is above a big gutter to get to the doorway of the castle. Payment of 30GHC is paid at the gate as a foreigner, mind you identification is very important at these places if you are to pay the local price.

I was asked to join a group and a tour guide was assigned to us. About two other tours were ongoing but it was seamlessly done in such a way that teh tours do not affect each other. Our tour guide introduced himself and the tour began.

According to history the first Europeans to arrive at the then Gold Coast were the Portugese and they arrived in the year 1471. They came to buy gold, Ivory, spices and some other artifacts. They brought wine, tobacco, building materials, guns and gun powder. the major commodity they were able to purchase in large quantity from the locals was gold. The rate at which the locals were exchanging this same precious commodity for the cheap foreign goods gave the Portuguese the impression that Gold Coast was a land that has gold in abundance. This resulted in the name ‘A Mina’ or ‘Da Mina’ meaning ‘The Mine’ or ‘Gold Mine’. The locals could not pronounce the name properly thus they corrupted it and called it ‘Elmina’ which is the name it still bears.
Before the arrival of the Europeans the town was popularly called ‘Amankwaa Kurom’ meaning ‘ Amankwaa’s village’ named after the founder, Kwaa Amankwaa, as it was customary back then to named the village after the founder.

In 1482, 11 years after establishment of a lucrative trade route, a need came for them to establish base in the then Gold Coast. On 20th January, 1482, the Portuguese led by Don Diego d’Azambuja, with a Portuguese interpreter Juan Bernardo who had learnt the local language, met with the chief and the elders to negotiate for a piece of kand to build their fortress.

The then Chief, Nana Kwamena Ansa was not in support of a permanent residence for the Europeans citing the differences in lifestyle and culture. But after much incessant persuasions from the Portuguese and the hope of peaceful co-existing, the chief granted their request. The castle occupies an area of about 100952 feet or 2.32 acres. On completion, the castle was named after their patron saint in Portugal, Sao Jorge(Saint George). THis is the original name of the castle but people tend to refer to it as Elmina castle after the town.

The noble trade intentions went on until the Trans-Atlantic Slave Trade, also referred to as the worst of crimes started in the early sixteenth century. The warehouse that was built to house goods were converted to dungeons to house about one thousand captives at a time About four hundred female captives were kept in the inner courtyard and about six hundred male captives were kept in the different dungeons.

In the year 1637, 155 years later after the castle was built, it was captured from the Portuguese by the Dutch. This was achieved after several attempts and with the help of the locals from Fort San Jago, which overlooked the castle they bombarded the Portuguese from land and the sea.
They renovated the castle, opened the dungeons to contain more captives, repaired the destroyed parts, and they also traded in Slave Trade.

The Dutch were in the Gold Coast till the Slave Trade was abolished and the castle was traded to the British in 1872 when it became costly to maintain. The British were involved in illegal slave trade and they used the castle in Gold Coast for their slave merchandise while Elmina castle served as their administrative center.
The Dutch built five forts to secure all inland routes to avoid a repetition of what they had done to the Portuguese. The forts are San Jago, Natglas, Schomerus, Java and Beckenstein. It is only Fort San Jago that is still standing till date, the others are in ruins.

Three years after the second World War, that was in 1948, the British converted Elmina castle into Police Training School. In the year 1957, Colony of the Gold Coast gained Independence under the name Ghana. The Elmina castle is 536 years old, it is the oldest and biggest European built castle in Africa. Standing in the middle of the courtyard is a storey building that was went through different transition. It started as a church, then a slave market, a school and presently serves as the museum. The Irony of this building is that it has a slave dungeon under it while the slave masters were supposedly worshiping God.
The ground floor rooms were converted into dungeons for the male captives, the soldiers, traders and the technicians were staying in the rooms on the first floor. The Deputy Governor lived on the second floor and the governor lived on the top main floor. Living arrangements were in relative to their hierarchy.

THE INHUMANE TREATMENT OF THE AFRICAN CAPTIVES

In the middle of the inner courtyard is a reservoir that was dug by the Portuguese and filled with rain water. Ceramic pipes were connected to the building to harvest rain water into the reservoir. This was their only source of water for cooking, bathing, drinking and any other domestic purposes. The Dutch who captured the castle from the Portuguese however did not use the Reservoir simply because they thought the Portuguese would have poisoned the water. Recent tests however showed that the reservoir was never poisoned.

The European soldiers who disobeyed were kept in a cell which has windows and ventilation, they were sent to the cells to discourage others of such characters not to really punished them in comparison to the African captives who were kept in rooms with no windows and no source of lights.

Captives that were ready to be shipped out were made to walk through dark dungeons with very low bhead room to the room of No Return where they are finally shipped out.

‘IN EVERLASTING MEMORY’
Of the anguish of our ancestors
May those who dies rest in peace
May those who return find their roots.
May humanity never again Perpetrate such injustice against humanity.
We the living vow to uphold this.

This is a very touching declaration and I do wish we are upholding it.

I want us to note that Slave Trade did not start with the white men as we are told most times, it started with us, the Blacks. Chiefs and the elites back then were already having slaves in their homes, people who do the hard work and do their bidding. The White man only capitalised on what we have set the process in place without knowing. This was fueled by our greed and ignorance in a way. But do we still continue in this way. Their might not be physical chains and canon balls tied to our ankles, their is the chain of economics and politics which we hold over ourselves as a people.
Ever wondered why Africans excel when they go abroad but they can barely succeed except they are Yesmen to some group of people in their countries?
Looking forward to your different response on this.

The concluding part of the tale next week.